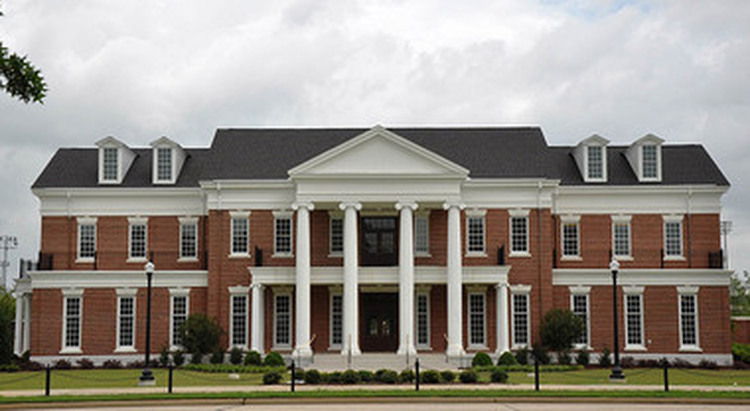 In 1922, eight men formed an organization known as the Gamma Sigma local fraternity (G stood for "gentlemen", S stood for "scholars"). The group was also known as The Cupids-the fore-runners to our modern Alpha Phi chapter at the University of Alabama.

In February of 1926, a petition for charter was tendered to the Grand Chapter of Theta Chi. The petition was subsequently granted and Gamma Sigma was made Alpha Phi Chapter of Theta Chi on May 7, 1926. The installation ceremonies began Friday, May 7th, and ended the following evening with a formal banquet at the Hotel McLester in Tuscaloosa; immediately followed by a dance at the Tuscaloosa Country Club. From 1922 to 1925 The Cupids were housed in a three story colonial home near the campus. In 1926, with its newly-granted charter, Alpha Phi moved to a new home on campus (located on the Quad) which had been built especially for the organization by the University.

However, due to the University's need to expand, in 1961 the Alpha Phi house (located on the Quad) was demolished and a new home was built at 501 Jefferson Avenue. This location serves as the current Chapter House for Theta Chi at Alabama.

In 1969, Dale Taylor petitioned for the Ladue Fund (Emergency Fund established in 1950). The Fund is administered by the Grand Chapter for emergency use. Dale Taylor later won the Colley Award, the highest honor bestowed to a Theta Chi Brother. Currently, Brother Taylor serves as the National Director of Theta Chi. In 1971, Harry B. Lackey co-signed for a $25,000 note to expand the Chapter House. With this gracious gesture, Alpha Phi constructed its New Wing ("The Lackey Wing") in 1971.

Our brothers are talented. Each year, the National Chapter recognizes outstanding chapters with the Alter Award & the Colley Award. These are the highest honors bestowed upon a chapter and brother, respectively. With great pride, Alpha Phi men continue to be recognized for improving the lives of its members and the university community as a whole.