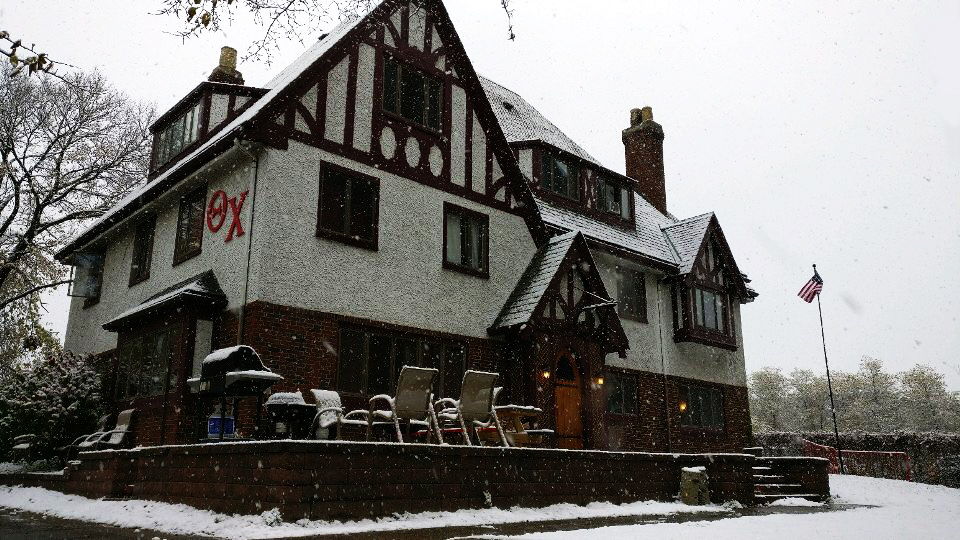 The years immediately following installation appear to have been a very busy time for Alpha Pi. A 1925 article from The Rattle of Theta Chi indicate that the chapter was actively recruiting the best athletes and scholars from among the University of Minnesota’s student body. 1929 was an important year for Alpha Pi. That year the 73rd annual Theta Chi convention was held in Minneapolis at the invitation of Governor Christianson and featured an inspection of the newly constructed, English-style chapter house at 315 16th Ave. SE. For the next few decades, records are currently lacking, but the chapter was active in all respects and several eminent figures, among them Harry Reasoner, the ABC news anchor, passed through its doors during that time. During the 1980s the chapter continued to thrive, and it was during those years that Paul Norstrem, who would later serve as Theta Chi’s National President from 2002 to 2006, was a member. A Rattle article from 1988 mentions the chapter that year as having refurbished parts of the house, received the highest pledge GPA, and also mentioned that several of its members were involved in student government at the University of Minnesota.

Unfortunately, by the late 1990s Alpha Pi was facing hard times due to low membership and the chapter house being left in poor condition. Moreover, this was a difficult time for Greek life in general at the University of Minnesota, and Theta Chi was by no means the only organization to leave campus. The Alpha Pi chapter was officially declared inactive on February 14, 2000. Not long after, the chapter house was sold and still stands today as a coffeehouse. Despite Alpha Pi’s departure from the University of Minnesota, the chapter’s alumni have remained in contact and many are active in the Twin Cities’ Alumni Organization which organizes events such as the annual dinner/get-together for Founder’s Day. In total, 1,035 men were initiated into the Alpha Pi chapter during its time on campus.

In the fall of 2012, two Leadership and Education Consultants, Cory Loveless and Joe Macko, arrived on campus and began recruiting men in order to form an interest group. Around that time, the Minnesota Daily published an article “After 13-year absence, Theta Chi Fraternity looks to come back.” Over the next several months Cory and Joe organized events for the new members to get to know one another, taught organizational skills, and trained the newly elected officers of the colony. International Headquarters accepted the petition for colonization later that semester, and a pledge pinning ceremony was held for the members of the colony on December 8, 2012 at Hansen Hall on the West Bank.

Over the course of the following semester, the spring of 2013, the Alpha Pi colony became more active on campus and within the Greek community. Colony members attended several philanthropies hosted by other houses, participated in volunteering with Amplatz Children’s Hospital, Feed My Starving Children, and People Serving People, and enjoyed a couple of social events organized with sororities on campus. Two of our members even competed on behalf of Theta Chi in sorority Sweetheart Week competitions. In the meantime, the colony strove to develop a more organized committee system and persistently made an effort to recruit men of high caliber for the fraternity. In order to assist us with these efforts, LEC Alex Nunchuck visited the colony in February. By the end of the Spring 2013 semester, the Alpha Pi colony had 31 members.

Alpha Pi began the following Fall semester with 26 members due to a couple members graduating and a couple more deciding to disaffiliate. However, we participated in formal rush organized by the Minnesota Interfraternity Council for the first time, and rush week was well executed and ultimately gained us a large group of high quality new members. LEC Justin Jones visited us twice around the rush period in order to check up with colony officers, suggest recruitment ideas, and present several national policies regarding hazing, responsible parties, and recruitment. By the end of fall rush in September, the colony stood at 43 members. Over the course of the fall semester, we continued to grow within the greek community as well as within our brotherhood. Early in the semester, we made a small task force with the objective of submitting our petition for reinstallation. Our petition was approved, and we rechartered at the historic Normandy Inn in Downtown Minneapolis on December 7th, 2013, just a day less than a year from our colonization.

On October 31st 2017, the Alpha Pi chapter officially purchased their current house at 305 19th Ave SE, with support from the Alpha Pi Alumni, after a year of leasing the property. That very same fall semester, they  initiated 22 brothers, their largest class to date. In just five years, the Alpha Pi Chapter has grown from a colony of few members meeting in a dorm basement to having a place to call home in the heart of campus.