Per the November 1922 edition of The Rattle, Beta Chapter’s correspondent wrote:

“In the first place, Beta wants to tell the world about the new house, but as that has been covered (as will be found on another page of this issue), from soup to nuts by Squibby, who was one of the big cheeses in putting the deal across, I will merely say that it is a beauty, and continue to the next topic…”

On Saturday, October 1, 2022, alumnus and collegiate brothers of Beta Chapter gathered together to celebrate 100 years of their chapter house – a century of brotherhood in the same four walls of its beloved brownstone at 528 Beacon Street. Rain and cloudy skies didn’t put a damper on the festivities in Boston. House tours, campus tours, and the MIT football game commenced as scheduled prior to the main event: a banquet on campus followed by a dessert reception at the chapter house. 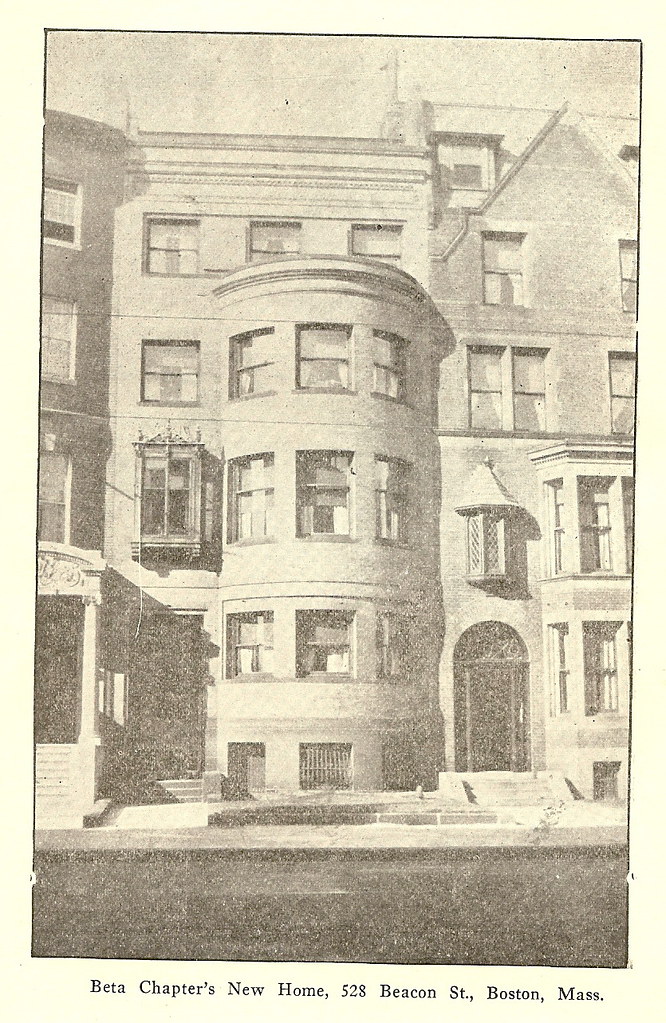 International Secretary Al Copeland and International Chaplain Dr. James Black presented a resolution adopted by the Grand Chapter in honor of the Beta Chapter House Centennial and then bestowed a brick from Theta Chi’s founding site at the Old South Barracks in Norwich, VT, to the officers of the Beta Chapter Alumni Corporation to install within the chapter house as a way to further connect Beta to Alpha Chapter and the founders.

In honor of the centennial of Beta’s Chapter House, we share the resolution adopted by the Grand Chapter as well as a reprint of the original article regarding Beta’s new house featured in the November 1922 edition of The Rattle.

WHEREAS, The Grand Chapter proudly recognizes chapters, events, and milestones which, by their longevity, have demonstrated their historical significance to Theta Chi Fraternity; and

WHEREAS, Through the leadership of Park Valentine Perkins (1905) and dedication of Alpha Chapter alumni living in Boston, Beta Chapter of Theta Chi Fraternity was installed at the Massachusetts Institute of Technology on December 13, 1902; and

WHEREAS, In May 1922, after 20 years of experiencing the “annual agony of looking for and trying to rent a better home” the men of Beta Chapter decided to buy a home worthy of Theta Chi, “with a feeling of pleasurable anticipation, picturing themselves 'throwing a mean dance' midst white woodwork”; and

WHEREAS, After looking at some 40 houses in Boston and Cambridge, Beta Chapter decided to make an offer on the property at 528 Beacon Street; and

WHEREAS, Due to capable negotiation tactics and superior mathematics, Beta Chapter was able to bring the original purchase price of $48,000 down to $40,000 after three weeks of parleying and provided a $2,000 guarantee; and

WHEREAS, Roland E. Page (1906), Paul B. Webber (1907), and William W. Drummey (1916), formed the nuclei of the organization to hold the property and formed a real estate trust under the laws of the Commonwealth of Massachusetts known as The Theta Chi Trust; and

WHEREAS, Since its purchase, Beta Chapter's “five story buff brick house, trimmed in brownstone, one-half block west of Massachusetts Avenue on the river side of Beacon Street, commanding an uninterrupted view of the new Technology buildings, the Charles River Basin, and the Esplanade” has witnessed the initiation of 1,094 Resolute Men into Theta Chi Fraternity and has served as a home away from home for generations of brothers"; and

WHEREAS, Among these nearly 1,100 brothers are many outstanding collegiate members who have gone on to be very productive members of society as scientists, doctors, teachers, lawyers, farmers, actors, engineers, statesmen, military leaders, and CEOs, including Dr. George B. Darling (1927), former director of the Hiroshima Atomic Bomb Casualty Commission, Inventor Dr. Richard S. Morse (1933), and Donald A. Sillers, Jr. (1949), chairman, CEO of Peerless Manufacturing Co.; and

WHEREAS, Beta Chapter brothers who lived at 528 Beacon Street served their country during World War II, the Korean War, the Vietnam War, the Persian Gulf War, and most recently, the war against terrorism in both Afghanistan and Iraq; and

WHEREAS, Several members of Beta Chapter died protecting our freedom; and

WHEREAS, James R. Thompson (1979) and Gregory J. Wilson (1979) were selected as the 1979 and 1980 recipients of the Fraternity’s highest collegiate honor, the Reginald E.F. Colley Award; and

WHEREAS, Beta Chapter brothers received the Fleetham Convention Attendance Trophy in 1980 and 1982; and

WHEREAS, Including the 191 brothers and many Theta Chi stalwarts who preceded the chapter house, Beta Chapter has thus far initiated a total of 1,285 Resolute Men and the Grand Chapter recognizes the Beta Chapter experience prior to and at 528 Beacon Street provided and continues to provide the inspiration necessary for such great contributions;

BE IT FURTHER RESOLVED, that we, the members of the Grand Chapter, wish the collegiate and alumnus members of Beta Chapter our very best for future success as they enter their second century in their beloved chapter house.

Adopted by the Grand Chapter of Theta Chi Fraternity this 28th day of September, 2022.

Sometimes a lot of nerve and a little cash will, if properly directed, accomplish in five months from a standing start that which has been tried for twenty years. Although we have not quite finished, we at Beta are now enjoying the results of one of those times, in the best chapter home at Technology.

As clothes set off the man, so the fraternity house sets off the fraternity. We had realized this for some twenty years, to our extreme discomfort, and one night last May we decided that our annual agony of looking for and trying to rent a better home must cease. It was more or less forced upon us, for no wise Boston landlord will rent a good house to a fraternity if he can

rent it elsewhere. You can't blame him for that! We wouldn't rent ours to one! We couldn't have been more confident if we had had Aladdin's lamp; we soared over all difficulties on a magic carpet, and with a feeling of pleasurable anticipation pictured ourselves “throwing a mean dance” midst white woodwork. That was in meeting, when we decided to buy a home worthy of Ѳ X. The next morning was cold and gray and rainy, and our carpet hit an air pocket occasionally as we began to appreciate the task before us. However, we had crossed the Charles and had informed our landlady the previous night that she could look for a new tenant, so we must needs go ahead.

Our present intimate acquaintanceship with every real estate broker in Boston and Cambridge started at this time, as did our knowledge and disapproval of Bostonian architecture and wallpaper. The majority of the latter is inexecrable. We looked at some forty houses before deciding upon the property at 528 Beacon Street, Boston. We had hoped to escape the abovementioned agony, but instead we laid in a twenty year supply. Having decided upon the house we wanted, we opened negotiations for its purchase, and after three weeks of parleying, during which the owner made discreet, if somewhat nettled inquiries as to whether we were a Christian fraternity, his price of $48,000 come down to $40,000 which we accepted. The agreement of sale was signed with a proper feeling of solemnity and responsibility mingled with fervid hopes that the twelve cylinders of our carpet would continue to make the grade. These

hopes became prayers as we passed over a $2,000 guarantee.

In the meantime the work of organization had been going on apace. We had selected Brothers, R. E. Page, '06, P. B. Webber, '06 and W. W. Drummey, '16 as the nuclei of the organization to hold the property, and after extensive legal investigation it was decided that the best procedure was to form a real estate trust under the laws of Massachusetts, to be known the The Theta Chi Trust, with them as the Trustees. The Trust holds title to the property and leases it to the chapter for an annual rental sufficient to cover all its expenses. The Trustees have complete control over the property and can dispose of it as they wish, can select their successors, and are not personally liable for the financial affairs of the Trust.

We made a careful study of the plans for financing other fraternities, and cocked a careful ear to the exhaust of our carpet whenever we came across a failure. We can wiggle our ears real well now. The following plan was finally decided upon. The Institute took a first mortgage for $25,000 at 6%, the owner of the property took a second mortgage for $8,000 at 6%, and $10,000 of twenty year, 6%, third mortgage bonds were issued. This allowed the Trust a surplus of $3,000 for alterations, office expense, etc. The second mortgage is to be redeemed at the rate of $800 annually, so that in ten years the bonds become second mortgage bonds. The bonds were issued in units of $500, $100, and $50, dated September 1st, 1922. They are subject to call in whole or in part on any interest date after 1924 upon thirty days' notice, at par and accrued interest. A sinking fund of $500 per year is established for their redemption.

Circulars, signup blanks, letters, and other literature were promptly sent to every Beta alumnus, active, and parent, and from this point on things began to become more strained as our motor labored. The first response was far from encouraging, and numerous followups were sent to delinquents, while many alumni were seen personally. On the date set for the final passing

of the papers $9,750 of the bonds had been subscribed, and since this amount was ample for our needs, no effort was made to complete the $10,000.

Our magic carpet still had enough magic left after six weeks of corduroy roads to safely deposit us in our new home, “a five story buff brick house, trimmed in brownstone, one-half block west of Massachusetts Avenue on the river side of Beacon Street, commanding an uninterrupted view of the new Technology buildings, the Charles River Basin, and the Esplanade.” It is in the center of the fraternity district; Delta Upsilon, Phi Kappa Sigma, and Sigma Chi are next door neighbors.

The social facilities of the house are unexcelled. From the pool room in the basement through the music room, spacious hall, and exceptionally large dining room on the first floor, to the equally spacious hall, parlor, and library on the second floor, the house is ideal for dances, smokers, banquets, and other indoor sports. The library, overlooking the Charles, is especially attractive, with beamed ceiling, built-in book cases and seats, and a beautiful fireplace and mantel. A feature which attracts immediate attention is the excellence of the wood work, particularly in the stair hall and stairways, which divide into two to reach the second floor, while a large full-length mirror at the landing enables young lady guests to see that all hangs straight. On the third and fourth floors are study rooms with accommodations for 30 men, while on the fifth floor is a dormitory with a capacity of 50. But we've got to leave something for your first visit here, so we won't say any more about the house.

The message we want to give to other chapters is this: that given a fairly strong active chapter and a loyal body of alumni it is possible for every chapter to own its own house without having a surplus of twenty thousand dollars or so, and second that a chapter never knows definitely whether it possesses these qualifications until it tries. Go to it, brothers, but don't rely upon a magic carpet.

We’ll end this trip down memory lane with the closing thoughts of Beta’s 1922 Rattle correspondent, “As a parting word, let us say that brothers visiting Boston should bear in mind that we are now at 528 Beacon Street, and that the latch string always hangs outside.”

Notes of congratulations may be sent to thetachi@mit.edu.