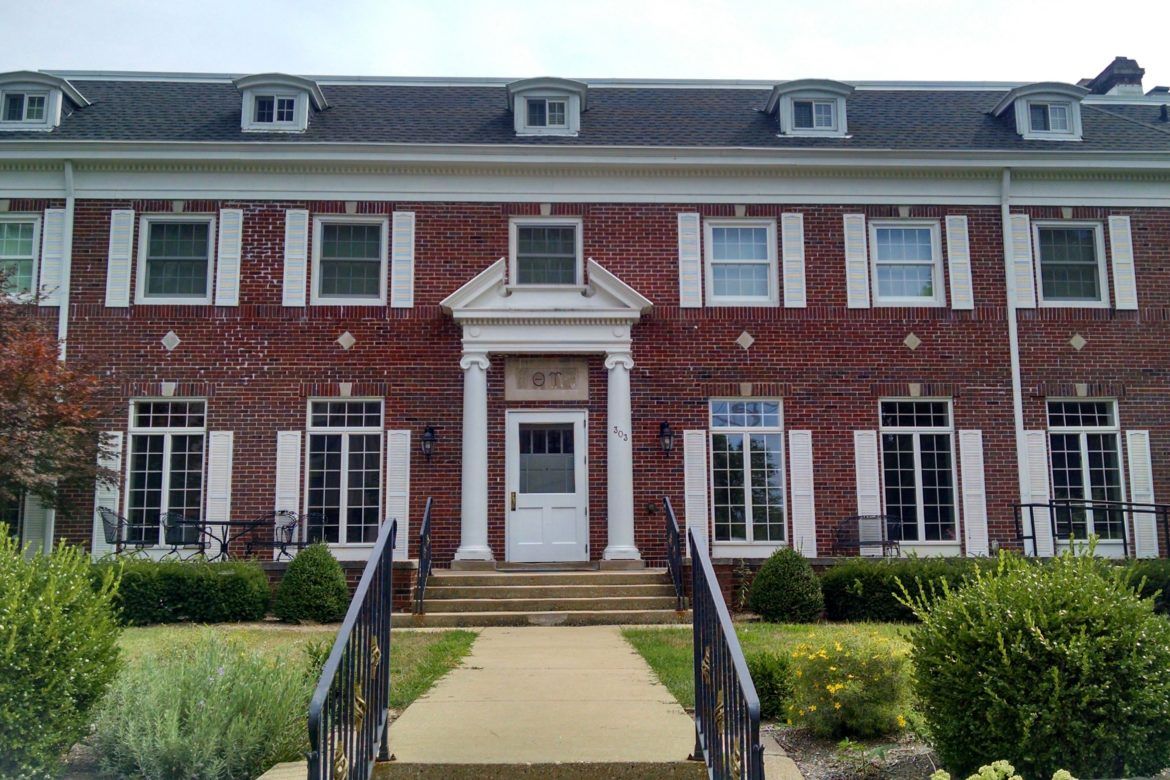 In the second semester of the year of 1910, a local chapter of the brotherhood of Saint Andrews, organized as an Episcopal club, was established at Illinois. This club, formally known as “Trigon”, was intended to provide means of economical and beneficial intercourse to the students of the Episcopal faith. Through the efforts of Professors Dufour and Stoek, Dean Green, Mr. P. H. Dunn, and the Rev. Poland, the club was started successfully, and a constitution was adopted and a house rented on Springfield Avenue, in Urbana.

When the semester began in the Fall of 1911, such difficulty was encountered in filling the house that it became necessary to take men who were not members of the Episcopal Church. The influence of these men materially changed the ideals and purposes of the organization. The status of the club, among the other organizations in the University, was at this time a very peculiar one indeed. In the eyes of the local Episcopalians, it was a church club; to the student body, it was virtually a fraternity; while the members themselves considered it nothing more than an incidental organization, loosely held together.

The lack of close fellowship finally culminated in the withdrawal of eight of its members who wished to form a more “pretentious” social fraternity. These eight men formed a local fraternity by the name of Delta Omega, which in 1915 became the Illinois Chapter of Lambda Chi Alpha. Through poor management, “Trigon” fell into severe debt and with the loss of nearly half of its members, total dissolution, for a time, threatened its existence. Indeed, it was only through the persistent efforts of the remaining members that the organization was kept intact. After a careful and thorough reorganization, the name was changed to Pi Omicron, and to Arthur T. Thomas, Fred DuHadway, G. Edward Quick, Frank D. Garland, John N. Fetherstone, Merle F. Lummis, Kenneth B. Bush and Clyde C. Barr were responsible for Pi Omicron’s continuance. Through their hard work, they succeeded in securing a dozen or more new members, who joined in the Fall of 1912, and who willingly assumed the heavy responsibilities and obligations of the fraternity to such good purposes that its indebtedness was soon liquidated and Pi Omicron was placed on a firm financial basis. This financial relief made it possible in 1913 to leave the old location on Springfield Avenue and move into a more comfortable home at 916 West Green Street, Urbana, where the chapter remained until the Fall of 1919.

A more specific idea may be gained of the purposes and ideals of Pi Omicron by reciting a few abstracts from its ritual and constitution. New members were elected by unanimous ballot in a meeting of all active members, upon the basis of manhood, congeniality, and scholastic ability. The result of such choosing manifests itself in the scholastic standing maintained by the group. Never during its existence did Pi Omicron place below sixth among the general fraternities at Illinois, the average being about third. Quoting further, Pi was given as the first letter of the Greek word Polimathias, meaning scholarship, and Omicron the first letter of the Greek word Omilia, meaning fellowship. These two words, fellowship and scholarship, symbolized the ideals of those that were later to become the Rho Chapter of Theta Chi.

In December 1915, after having been offered a charter, by a then small national fraternity, Pi Omicron decided to petition Theta Chi Fraternity. On April 8th, 1916, Pi Omicron was authorized by the Grand Chapter to organize and transact business as Rho Chapter of Theta Chi. However, it was not until May 20th of the same year that the official installation committee composed of Dr. Robert L. Irish (Alpha/Norwich 1889), F. V. Hugo (Epsilon/WPI 1912), J. B. Wirt (Beta/MIT 1915), L. B. Scott (Theta/Massachusetts 1915), and W. M. Stanton (Kappa/Pennsylvania 1913) arrived to install the new chapter. On that same day, the Council of Administration of the University granted permission for the formation of the chapter and formally took recognition of it. At the same time, Rho was admitted to the Pan Hellenic Council now known as the Interfraternity Council of the University of Illinois.

By the end of the school year of 1917, Rho began to feel the effects of World War I. The exodus of men to all branches of service began to show, as the University began to offer full credit to all students who took up some specific work of national defense. The full effect of the war was not felt, however, until the Spring of 1918. In September of that year, an S.A.T.C. Camp was established at Illinois. The old peace and quiet of the campus was no more. Every tradition that Illinois loved was upset. Changes almost revolutionary took their place. Changes of such nature naturally effected Rho Chapter. Its home was taken over by the government and given to a sorority, Kappa Kappa Gamma, in order that their home, in turn, might be used as a barracks. But even the new military spirit with its multitude of government regulations was not sufficient to kill the fraternity spirit in the fifteen or twenty men who made up the chapter. They rented and furnished a suite of rooms just off the campus and here all of the fraternity work was carried on. The numerous and complex problems seemed to instill in the members a new spirit of fight. All of them were determined that under no circumstances would Rho give up “ship,” even for a few months. With the dissolution of the S.A.T.C. on December 21, 1918, plans were made to again take up the work in their real home on West Green Street.

In the Fall of 1919, school opened with an old time pep and spirit, though an increase of over 2000 students in the University had made conditions very crowded. Rho had anticipated the return of many of the boys who had been discharged from the Army and Navy and that gave rise to securing a new and larger home. It was at this time that Rho moved to 404 East John Street, Champaign.

The Illinois Victory Homecoming in the Fall of 1919 was indeed a real affair. Many of the boys came back and talked over and lived again the good old days that used to be. Of the boys who were fortunate enough to be present on that occasion, none will soon forget the wonderful advances taken by Rho Chapter. It was then that the Theta Chi Alumni Association of Rho Chapter was formed and incorporated. Fred A. DuHadway was elected President, John J. Pieper – Secretary, and Frank D. Garland – Treasurer. This organization took the first step toward the realization of a dream: a fraternity home of their won. Shortly thereafter, a lot was purchased and in a short time paid for. It is on that exact spot that Rho’s new magnificent house stood, a monument to the untiring efforts of those loyal members and the first Theta Chi chapter owned house.