Shippensburg, PA – On November 17, 2019, Theta Chi reinstalled the Zeta Omicron Chapter at Shippensburg University after a 30-year absence. The Fraternity now boasts a total of 11 active chapters in the Commonwealth of Pennsylvania.

Zeta Omicron alumnus Joseph Carothers (1976) was serving on Shippensburg’s Alumni Association board and believed in the usefulness of fraternities and wanted to bring Theta Chi back to the University. Through conversations with school board members, Carothers was able to secure an invitation for Zeta Omicron to return. Following initial recruitment efforts by a brother who had recently transferred to Shippensburg University, the International Headquarters staff provided further guidance and assistance to the emerging interest group. When the group reached a total of 16, they were officially recolonized as the Zeta Omicron Colony on February 4, 2017.

After colonization, despite challenges within the school and the Greek community, the members successfully built upon their foundation. They became involved with the community by helping to restore a greenhouse at a local elementary school, held a clothing drive to benefit the Salvation Army, and helped the Chesapeake Bay Foundation in planting trees to raise awareness about environmental health.

The men supported Chapter Adviser Bob McCurdy, a first-grade teacher at a local elementary school. Several brothers in ROTC put 550 students through boot camp for a Veterans Day program. Each brother came to his school to read with first graders during Read Across America Week to celebrate Dr. Seuss’ birthday. Several of McCurdy’s colleagues complimented the brothers and said that their interactions with the students were more mature and professional than some of the student teachers who they had worked with. They supported McCurdy with other projects and even helped an alumnus move into his new home.

Colony members had group meals in the on-campus dining hall at least once a week and held brotherhood bonding events following colony meetings each Sunday.

In the spring 2019, the colony held their first G.I. Theta Chi event and hosted a chili cookout. Many people came out to support and some even donated without wanting any food.

Members of the colony attended different Theta Chi events and learned about recruitment, scholarship, and leadership in the Fraternity to improve their operations.

The men continued to focus on improving their academics and recruiting men who would be a benefit to Theta Chi. All their efforts culminated with the Zeta Omicron Chapter being approved by the Grand Chapter for reinstallation.

A reception was held following the reinstallation at the same site. Attendees included those listed along with family and friends of the new brothers. A key feature of the reception was an historical display of composites, photos, memorabilia, and other items from the original Zeta Omicron Chapter.

During the reception program, Mitch Nolan served as emcee and invited brothers to present remarks. Joe Carothers gave a brief history of the group and challenges that they had overcome; Chapter Adviser Bob McCurdy discussed the members’ efforts in volunteering and their personal growth; Chapter President Bryce Marquard and President-Elect Logan Kane celebrated their achievements and accomplishments as a colony and announced goals for the future; Army veteran Richard Weber recognized Zeta Omicron alumni in attendance and discussed Theta Chi for Life; Field Executive Daniel Mendoza reviewed initiation week and challenged the members to remain involved; Rattle Editor Ben Hill presented a special gift: a vintage Theta Chi Shippensburg license plate that had been stored at the International Headquarters and requested that each new Chapter President sign it and pass it on to their successor; and Past International Vice President Joe D’Amore congratulated the brothers of Zeta Omicron and encouraged them to remain true to each other and to Theta Chi.

The chapter also presented local awards to the following brothers:

Bryce Marquard stated, “I’m very proud of the brothers of Zeta Omicron Chapter and I look forward to see the future impact we make on the Shippensburg campus and community.”

“The men of Zeta Omicron worked hard throughout their Initiation Week and learned more not just about each other but themselves as well,” said Field Executive Daniel Mendoza. “It was such a pleasure to watch them grow over the week and see true joy on their faces on Sunday after the ceremonies; more so holds true on the alumni that were in attendance in the ceremony, including those from the original Zeta Omicron chapter.”

Logan Kane reflected on the day and shared, “It was amazing to finally hold our charter. It certainly was a group effort to get to this goal - it wasn’t just one man. When I came up to speak, I didn’t use my notes because a great Theta Chi who spoke before me, Bob Mccurdy, said to always speak from the heart, so that’s what I did. I was so very proud to look around the room and see Theta Chi brothers from 30 years ago and everywhere in between, all united with me and the newly initiated members of Zeta Omicron Chapter.”

Congratulations to our new brothers of Zeta Omicron/Shippensburg!

Congratulatory notes may be sent to via email to Bryce Marquard. 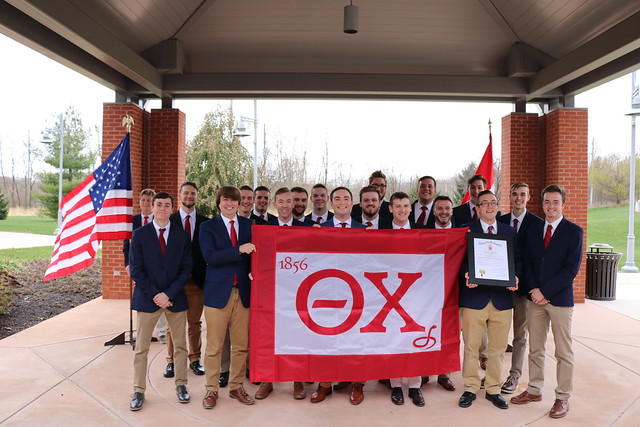